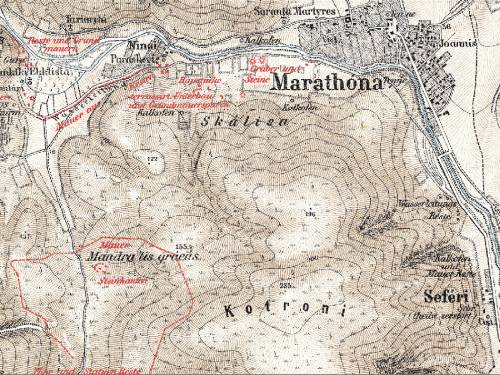 Karten von Attika and GISc: Antiquities and Topography of Attica in the Era of Digital Humanities

Based on the unsurpassed cartographic feat by E. Curtius and A. Kaupert, this project of the Dipylon Society aims at the creation of a webGIS platform for the archaeology of Attica by overlaying multiple layers of geospatial data (cartographic evidence, historical maps, excavation plans, and aerial photographs) on a unified digital map. The content of the platform will be bilingual (English-Greek) and open source.

The two German intellectuals depicted with astonishing accuracy in 26 cartographic sheets the land of Attica and the antiquities that were visible at the end of the 19th century. It took almost 20 years to complete this monumental project entitled Karten von Attika . With the use of state-of-the-art technology, the cartographic sheets will be georeferenced and merged, and all markings (ancient and modern remains) will be digitized. Cartographic data will be entered into a database to facilitate search.

Dr. Dimosthenis Donos translates the accompanying text, Erläuternder Text zu den Karten von Attika written by A.Milchhöfer, E.Curtius and G. Von Alten. The text is 230 pages long and is extremely rich in information and details on the Attic landscape and the depicted antiquities. Extracts from the text will be connected with specific locations on the map and with selected visual resources.

The project is being implemented with the generous support of the John S. Latsis Public Benefit Foundation, the George Vergottis Memorial Fund and the J. F. Costopoulos Foundation.